Full day : Tour will be required to start too early at 5:00am as you can pack breakfast along with you or you can eat breakfast at any good restaurant along the way & lunch the same also as we eat along the way.

Prah Khan Kampong Svay or Bakan Svay Rolay, there are few historical data about Preah Khan Kompong Svay. French scholars argued it had been founded in XI century, probably by Suryavarman I. It was a royal residence during the kingdom of Suryavarman II and even Jayavarman VII lived here, before recapturing the capital city of Yasodharapura from invading Chams in 1181, and improved the complex.

It’s about 170km from Siem Reap city and driving is very scenic, winding through farms and poor hamlets of Khmer, many of whom have never travelled outside of their small communities or to a city.

Spean Praptos is also known as Kampong Kdei Bridge on the National Road 6 from Siem Reap to Phnom Penh, used to be the longest corbeled stone-arch bridge in the world, with more than twenty narrow arches spanning 285 ft (87m). The bridge was built in the 12th century during the reign of King Jayavarman VII. It is one of the few Khmer empire era bridges to have survived to the modern day.

Tour is private tour for you or your group and the tour fee I charge for whole your group ( not per-person ).

Remark: To make you to satisfy all with tour services for payment of my tour fees will be required to settle at the end of tour only when finish tour (not require to pay in advance or deposit at all) and pay in cash in USD only ( NO credit cards ) 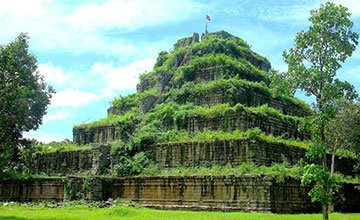